The best darts shop ever + message for my followers

It is with a heavy heart that i am going to have to quit darts.

As you will be aware, i initially took up darts after bringing my bodybuilding time to an end after a series of back injuries and unfortunately i have exasperated my back again during play.

I have a difficult situation in that to keep myself and my back in the best condition i can i have to exercise and do resistance band training. The byproduct of this is that this plays havoc with the muscle memory of throwing and i will lose to inferior players, as i cannot practice as i should. If i don't my back weakens and i suffer what occurred last night in that i twinged it and lost.

This occurred in July  2014 and initially i quit then, however i have been able to eke another year out however as someone who has hit a 116 ave, checked out a 125, hit multiple 180's and beat very good players i do not want to be 'name' fodder for pub players on a Monday night.

On a lighter note i wanted to let you guys know that i have discovered the mecca for buying darts: 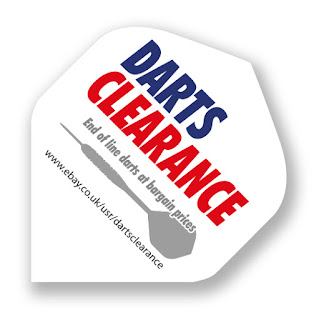 These guys are fantastic, and the darts there are incredible and insanely cheap. I have picked up (brand new):

and a whole host of Masterdart and other styles at insane prices.

All are tungsten, and all are fantastic quality.

I can vouch for these guys, it is a family run business and i implore you to visit the site in the picture. You wont regret it.

Anyway i would just like to thank everyone for all there support since this blog has been up, it has been fantastic the support i have had all around the globe, especially the USA,

I may after a long break reconsider but at the moment i need to step away.

12th Match of the season: Away to 'Bird in hand'. Always a good fixture

Its the 12th match of the season on Monday, away to the 'Bird in Hand'

Its a real odd one this place. its home of probably the most expensive pint in the area (at about £4 a pint), but a nice little 'tavern' style pub with a nice darts area.....................but they play 'thrash' metal constantly throughout the night. 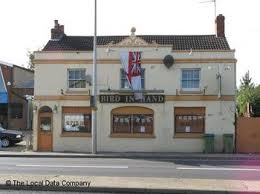 They're currently 3rd from bottom having won 3 of 8. They beat us when we were at home 4-5 and it is always a close fixture.

so i really see this fixture as 50/50 despite the 6 point difference, as there's not alot in it in terms of legs won and lost.

I have a 100% singles record against The Bird in hand (3-0)  so i am looking forward to the fixture.

I would like to thank you for your emails.

In regards to who my biggest darts inspiration is, that's a tough one as i admire alot of players for different reasons.

Determination/discipline:  You have to go with Taylor. Consider that he wasn't even playing top level darts until his late 20's imagine how many world titles he'd have if he'd have had the opportunities at a young age (+ Bristow's influence) in his teens. He'd probably have 30!

Throw: You have to go with Lowe, just perfect mechanics and the popular choice.

Longevity: You have to go with  Lowe. still an immense talent at 70!

Making the most of what talent you have: Dennis Priestley, didn't turn pro until in his forties!

Natural talent: Bristow. If Dartitis hadn't hit, with that ego and will to win, he could still be winning things now!  People forget that he was only 29/30 when it hit.

Mental strength: Bristow. beat players before they even set foot on the oche

Power scoring: Have to go with MVG. At the moment when he's on a 'run he's unstoppable!

Outshots: Barney. At times has hit silly high level outs to win it!

There are also others i admire e.g.

Ted Hankey: The definition of a smooth throw

Justin Pipe: The guy suffered a major injury and has to throw in a certain way, and has still hit the PDC top 16!

Leighton Rees: The 'first' world champion and late thirties when he won the 'old school' majors and for a 2-3 year period was the best in the world. His throw was also VERY smooth.

Andy Fordham: Though its nothing to be proud of,  but anyone who can drink 50 bottles of Becks and a bottle of Brandy and not end up dead let alone win a world title on it deserves some sort of recognition.

Bobby George: For being a VERY astute businessman, cultivating an image and making a HUGE mount of money!

and i must give a mention to everyone who turns up, regardless of talent, or age and plays because they love it and always have!

I suppose i have more affinity for the older players as it gives me some kind of hope that with abit of form i could do well in a BDO event and who knows after that. I certainly at times have had the form (albeit brief)  to hit BIG scores.

Anyway i hope that answers your questions.

I did decide to turn up for the pair competition, not realising just how big it would be as their ended up being 41 pairs turn up + spectators filling the small 4 board room up with 120+ people.

It was cramped galore, and absolutely boiling.

This was like a 'whose who' of County and local BDO players.

We drew a league 1 pair, whom i've not seen before. A nice bunch of lads, friendly and polite.

Anyway, we took the first leg with my partner taking out d2, but then we both had a serious 'mare' and lost the next 2 legs to lose  2-1.

We just never got going after the first leg and even a pressure 100 from me to take us down to a finish with them on 40 wasn't enough and they closed out.

This seasons pairs Cup tonight: Do i enter or do i not?

Its been abit of a disconsolate week for me this week.

I am not enjoying my darts, and there's been issues at home.

Its the Pairs tonight meaning it can be mixed or not, and i am in two minds about whether to go or not.

My form over the last 2 weeks has been markedly poor.

I know the problem is that i have put way to much pressure on myself. After getting off to such a good start i really thought this was going to be my season to shine and whilst i am still top of my pubs league table by 6 points, i think i have let some demons creep into my head.

The unexpected whitewashing by a grandmother last week certainly didn't help and i seem to have lost that 'edge'!

I'm thinking that having hit the 'apex' with that fantastic result against the Seagull, that i peaked, and somehow i need to get back that fighting spirit!

Match 11: A Rose in July does not smell as sweet! A 2-0 thumping by a Grandmother!

well, what can i say.

Totally blew it last night. before our league fixture, i took on all comers in the pub, winning 10-0 and hitting a variety of 140's and a sweet 17, bull finish. I totally blew my best darts.

I was on second and i was playing Rose. A grandmother who walked with a limp, and was about 5' tall.You should never judge a book by its cover, as this was one dark horse!

This lady threw darts whilst standing totally upright and face on, and lobbing them upwards like a shot-put! I made the mistake of watching her, and that was it i was done. I was hitting 60's, but she was hitting 80's and 90's.  It was surreal.  She done me (and deservedly so) 2-0 checking out with 1 dart both times.

Afterwards i was furious and hitting the practice board where low and behold i was poor for about 30 minutes. I had clearly played myself out of form before my match. I then recovered and in practice i was hitting 100's and 140's like mad, culminating in this sweet 180! 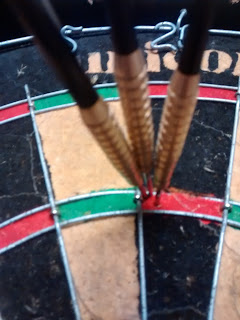 I could have had 5 more!

Unfortunately as a team we were equally poor, and got routed 7-2 (better than 8-1 which we suffered last time) and the night was over by about 22:30!

a naff night all around!

They gave us a 8-1 hammering in our second game of the season and sit in 5th place having won 6th of 10.  They have beaten the top 4 teams above them though and are coming off a 6-3 win off of Top of the league Seagull (remember them). They are a team who gets results

We are playing for pride now, as with 8 games left and with 0 points, winning the league is a mathematical impossibility (unless the top 4 teams pull out the league).

Here's hoping for a good result. 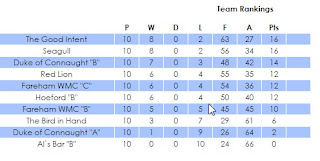 Match 10: Ends in another loss and i put in a stinker!

There's no other way to put this but this was a rotten fixture, and it shouldn't have been.

A number of the team (myself included) seemed to have emotional baggage this week and it resulted in tension, and a bad atmosphere.

I have to take alot of the blame here. After last weeks performance i was expecting something special, however i had had a bad weekend, fallen out with the wife, barely practiced and in short my head was anywhere other than the darts,  I put in a risible performance, hitting 30's, 26 and a 15 in my first 12 darts before my 'comeback' of big scores, including a 95 left  me on d4 which i just couldn't  with 9 darts and i lost a really poor leg (poorest this season probably). In the second leg i hit about 5 60's, and was ahead but i did the classic of:

and my opponent finished up, to give me my worst loss of the season 2-0.

I could have won but my head and my darts were just not connected. i could hear team members saying "whats going on", "hes way better than this", "this would be no probs, he's not here is he"

In short i had no 'fight' as my head was at home worrying about my Marriage.

I went home feeling annoyed and it kept me up most of the night (again stupid).

A word to the wise. Home is the most important thing. If there are issues there don't go to 'darts', it'll only result in a dismal performance,  Its better to sort things out than to go out and throw lemons at the board and go home and be up all night kicking yourself. Unless its a PDC or BDO Major it just isn't worth it!