Just thought i would check in.

I haven't picked up a dart in over a week, so thought i'd have a quick 5 mins. Picked up and first 3 darts  = 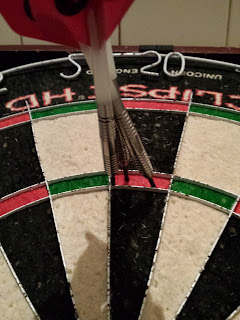 Still got it peeps:

Dint need to throw anymore after that.

for the record the setup is:

Darts Clearance: The BEST darts shop on the net!

I've blogged about them before but these guys here:

are the most genuine , helpful and legit guys out there. In short they care, and if youc ant see it, email and ask!

The quality is unsurpassed, your talking high quality tungsten darts in all the great shapes and sizes:

PS: they will ship abroad, so stop paying silly money for the equivalent abroad!

I would just like to blog for a minute on a win that i think really goes unnoticed these days and that's Webster's win over Simon Whitlock!

This is a Whitlock who would move over to the PDC and become a top 10 player and hit that final 2 years later!

An Update on how its all going!

I just thought i would check in as i'm still getting alot of 'hits' and messages despite the lack of activity which is nice, so firstly, thank you.

Anyway, the Summer season ended and the team i played for  (Al's bar) finished bottom, having picked up only 1 win in 18

I'm not surprised in fairness, There was just a complete dis-inclination on their part to do what was necessary.

Given that i left with about 6 matches to go, it should be noted that i was still responsible for 40% of the overall legs they won, so i guess i wasn't too bad was i?

Since then the Winter 15/16 League has started and they have lost their first 2. the First one 0-9 and the second 5-4 so normal service resumed!

I myself have had a few offers from teams, but at the moment i have little interest in re-joining the pub league, its not conducive to work, when sometimes not playing till 23:30 hrs. My thoughts may change however for the moment i have other priorities.

I have stopped wearing glasses  to play so i am hoping that this may lead to further improvements.

My target is to average 70, and then if i can do that maybe re-hit the league and tournaments but i think that is a long way off, although i have hit a number for 16-18 dart legs!

Anyway thanks again for the interest, update soon