How I Got Into darts: Chapter 13: My Own Worst Enemy!


Now for some darts is a ‘night out’ with competition thrown in, to others it’s deadly serious, and then there are those in the middle, those who care about how they play but don’t sacrifice their life to it.

I am someone who is intense to put it lightly, and will continually push themselves. It was the same in boxing, wrestling and weightlifting.

Unfortunately this can often be counter-productive and the urge to see the ‘negative’ in everything can start a vicious cycle which is all consuming.

In short I take losses badly, however I got to the point whereby I was taking playing badly even worse (even in victory).

Now unless you are gifted, darts is not the kind of sport whereby you can pick it up and within days be averaging 100+ and hitting 9 darters. Darts is about time and practice however I wanted it ‘quickly’, and this led to over-practicing and tinkering that would make Peter Wright proud. Often I would be the architect of my own downfall (turning up to match day with an ‘untried’ setup) as I constantly pushed. The pressure I put on myself was immense and the amount of nights I lay awake brutally analysing every aspect of my performance was unhealthy and I’ll be honest, completely stupid.

In short, I wanted to be tournament ready in a stupid timescale and when 5 hours of practice didn’t see me sweep aside my opponent in an 11 darter, I’d practice harder, and longer. This led to me aggravating, long-standing back, hip and shoulder issues, which further added to my frustration.

We were replaying the ‘Bird in Hand’ whom we had a good record against as a team and I was 3-0 up against them in singles competition.  Now we were bottom of the league having lost 11 straight, with the majority of the legs we’d won being down to myself.

I was growing frustrated with the team (unfairly) as they looked upon it as a ‘night out’ not the grave seriousness I approached every Monday fixture.

I was up 4th and against Shannon and had beaten Shannon before, however my nagging injuries, the atmosphere, and the fact that I’d changed to a set of 25g MVG before the match saw me lose 2-0. I did get to a double on the first leg however my scores were all 50's and Shannon decided to play a blinder. In truth I was beaten before the start. The team went on to lose 5-4 in a close one.

After that I tendered my resignation as Captain and from the team a few days later (the following week the team lost 9-0 and at end of season despite me missing about half of it I still made up something like 50% of overall legs won.

I was completely at fault and had pushed myself far too hard to quickly, and taken it way to seriously.

After that I barely played, save for retaining the second annual Sutherland trophy on 1st January 2016, until 2017.

Again though I was my own worst enemy, rather than start slow, I’d practice for a few days in a  concise way, start playing well and then I’d start hitting 2-3 hour sessions whereby I could barely lift my arm and my arm would be painful the next day.

After about 18 months I re-joined my old team (Al’s Bar) who were gracious to take me back however it was far, far too soon. I’d had a few good sessions, felt great and jumped straight back in.

Ironically my first singles match back was against the ‘Bird in hand’ (who I was 3-1 at), the last team I’d played.

I was up against Ron Nobes, a very older player who is a nightmare to play against. Ron was a very slow player with a very erratic style. Ron would throw seemingly random at the board yet hit trebles so to you'll go up and aim for the t20 and get maybe a 60/or 45. He’d throw everywhere and hit t19, t16 and t10, it does your brain in.

I won the bull comfortably but then put in a stinker of a leg. I was flat as a pancake, and Ron's style put me off. I hit 22 with my first 3 darts and was just dreadful. Seriously I’d played far better in losing than I did here. I won a staggeringly poor leg hitting d1 in what was probably the epitomy of a poor pub darts leg. Still 1-0 up!

I had probably left my best darts on the practice board as I was there for so long.  I put in a good hour before the match and hit several 100+ and a few 140s but then had a long break of doing nothing son in effect cooled down and went flat.

I watched one of our players do the same thing. Eric hit absolutely everything in practice, 100+ scores a plenty and 70+ finishes and yet come his match he couldn't buy a double and lost 1-2 in a match he dominated.

Despite winning my match I dissected my performance like a surgeon that night and re-hit the practice board, hard!

It was a BIG mistake. I put in a 5 hour session and my the 4th hour it was like I’d never thrown a dart before!

Now we've all had sessions like that so rather than get frustrated I put the darts away and gave myself off, knowing I had a few weeks until the new season. This is usually the best thing to do as spending another 2 hours winding yourself up and achieving nothing.
Anyway, I picked them up again a week later and it was even worse. It took about 6 hours to go around the board on singles, doubles and trebles! Something was clearly wrong!

There was no fluidity, no consistency nothing. They were literally going all over the place. Not just a small veer from T20 into the 1, were talking off board or into 12!

I took another few days off and over the next week I tried:

Rather than just chill and ride it out, i was getting frustrated and this wasn't helping at all!

At best some would work for 6-9 darts and then back to the same. Nothing would kick-start my play!

After 3-4 weeks of this I was forced to drop out of the team (my decision).
I should have just take a few weeks off but i'd got to the point that every missed darts was eating me up inside.

Looking back i wasn't actually playing that bad, it was my expectation that was out of check.

I was ‘shot’ I’d practiced myself to death before re-joining the team and once I had I was hitting the board like I was going for a PDC major.

I’d clearly ‘overdone’ it and had pressurise myself into some sort of dysfunction.

It was only then that I took heed and realised that I’d become my own worst enemy, and that I was and had put far too much pressure on myself for a skill-set I hadn’t yet developed, and that it was actually a far bigger hindrance than any opponent I’d face.

In the wake of Bristows passing i am trying to get it together so I can enjoy the sport i love. 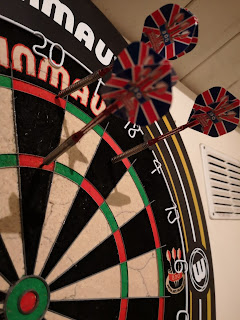 I have been off the seen for a while and only caught the final game of the PDC Premier League match between Gurney and Peter Wright when i heard the news.

Eric Bristow was the first true superstar of darts and the godfather of the modern game and its popularity.  I could list all his achievements but it is unnecessary! The man was an icon in not just darts but British sports! The man retired from pro play nearly 20 years ago however would probably be the first name to come to mind when someone ask "name a darts player"

One can only wonder how many titles he would have had further if not for dartitis. It could easily be 10 or 15 and its likely we wouldn't have seen Taylor as Bristow would have had no need to create a 'project'

The man dominated darts in the 1980's, created Phil Taylor (who would go on to dominate darts for the next 2 decades), changed the way players look at out-shots, made a type of dart popular like no other (that barrel will forever be known as a Bristow dart) and brought an interest to it that can still be felt today.

60 is no age at all however Eric would be the first to tell you what an incredible life he had and with little regret.

He may not have been everyone's cup of tea, but he was human like the rest of us, he just at times had the misfortune to say things we may do but in a different forum and one that will punish you publicly for it.

I was lucky to meet Eric a few times and play him once (wiring 9 darts at d13 to win) and now if anything this privilege now seems even more something to cherish and appreciate.

I was hoping to see and play him again, unfortunately that will never happen, but i will always at least have the memory of having darts to win against possibly the best ever, albeit at a different stage in his life (and lets be honest at any other point he'd have thrashed me stupid - i am not delusional)

RIP Eric your legacy will never be forgotten 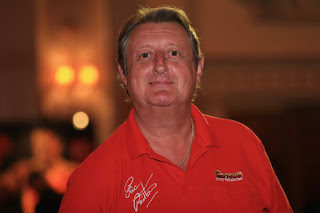