Inspired by Mensur Suljovic i have decided to focus on the importance of using a player for inspiration but not Imitation.

I am referring to try and copy another players throw or action.

It is easily done, you see a player having MAJOR success so you go and buy the darts and attempt to copy their throw........usually with terrible results.

Every play her a natural grip and throw, and it is this natural action that should be refined. Trying to imitate another player (unless they are VERY similar in everything to you) will only lead to a bad copy.

Its easily done and i am no different. As previously posted i have used the majority of darts and setups of pro's old and new and every time it has worked either only marginally or not at all.

I bought a set of 26g Unicorn Phil Taylor Rosso's and used his exact setup (inc those tiny flights).  I rehearsed his throw and release and then made my way to the dartboard.

The results were horrendous and many never even made it to the board. I spent 1 hour desperately trying to get all 3 on the board. It never happened!!!!!!

The obvious lesson being is that having Taylor darts and using a Taylor styled throw wont make you Taylor!!!!

Ithen went back to my previous darts and throw and first 3 darts hit 100!

You name it iv'e tried it from 16g Priestley's to the classic 22g Bristows and all felt wrong.

I have even tried to follow the John Lowe way in his book  (Lowe probably having the best darts action ever) however despite the 'sense', 'logic' and mechanical perfection it should in theory result in, it just doesn't work for me 1 iota.

The reality, i throw my way and i have to otherwise it doesn't work.

There are so many players out there and they all throw different as we are all different. The bottom line is if it works for you then that's your throw. It doesn't have to be pretty, as long as its effective!

Just look at Mensur Suljovic (7th in world) or the great Jocky Wilson!

Mensur Suljovic: This guy is one of the reasons i still want to play darts!!!

Watching the PDC European Championship final  between Mensur Suljovic and Michael van Gerwen it reminded me of the VERY reason why i love darts and still want to play it.

Suljovic has been something of an unfashionable player over the years.  The odd quirks pre-throw, the speed, the throw itself, the 'out choices', have all seen him come under criticism, and arguably ridicule.

I don't want to watch  an event where everyone has the same throw, stance, posture and 'counting', how boring is that????

Mensur for me represents everything that hard work and doing things 'your way' counts for and it inspires me and reminds me that just because you don't play like 'X' doesn't mean you cant make it!

Yes he lost in the final (and MVG was terrific)  but for me the result was almost secondary, here is a guy who for years has had derision and criticism for how he plays and yet hes now 7 in the world! yes 7th!!!!!

This is a stunning achievement and irrefutable proof that you don't have to be like everyone else.

I hear he's a nice guy as well and to see his family there watching him must have been something special.

So to everyone out there with quirky throws or ticks don't be put off and think that you cant achieve what you want (in darts or life for that matter) because as long as it works its right for you!!!!!

Welge has been on the scene since the 1990's and competed in 5 World Championships (1 x BDO, 4 x PDC)  and is one of Germany's finest and unsung darting exports.

Having played on the PDC tour, the Bulls sponsored Welgee made the last 16 in the 2012 European Championship and will be hoping to once again force himself up the PDC rankings. 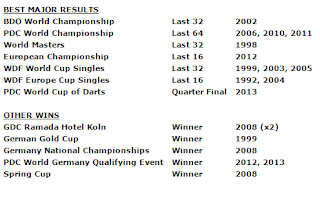 it is sad news to report that Martin 'Wolfie' Adams, whom i have had the pleasure of meeting has been diagnosed with prostate cancer.

Despite this he will compete in The PDC GrandSlam of darts - what a guy!!!!

A true legend of the game Wolfie has won an incredible 6 majors in his 50's (3 x wold champion) and is an inspiration to us all.

24/10/16: Quick update and the importance of natural grip and release!

and good morning (or evening) wherever you are.

I hope you had a good weekend.

I managed to pick the darts up briefly the weekend and although way below my usual standard, i was consistently hitting the 20!

I must stress that the most important thing i am finding is that it is ESSENTIAL to instill in the mind 'clean release, clean release'.

I must admit the older i get the calmer i seem to have gotten on my throw and this is important. Before i use to rush out the 3rd dart, but now for me its about consistency.

One thing i have noticed is that whilst the protracted break has affected my overall accuracy  it has enabled me to in effect 'reset' my throw as before i was getting frustrated and trying to force things whereas now i feel like i can work from the ground up and refine key elements.

If you watch the pro's the common denominator is that they all have a consistent throw, none of them change dynamics each leg and very few change their speed, or grip.

Having studied alot of players i have noticed that the majority use a 2 fingered grip (and from the rear) and as i have progressed i have started to reduce my 'fingers' on the dart and grip position.

Previously it was 3 fingers and a thumb across the whole barrel with thumb in centre but now its 2 fingers with thumb at rear. Its all about confidence really as when starting out more fingers equal more grip and feel of control, however it also makes for more contact on the dart and increased chance of release issues.

I do feel it is important to go with what feels natural though from a throwing point of view as trying to emulate another players throw  has, for me at least proved to be 'unnatural'.

e.g. i have tried to emulate the following players throw (with their darts) .

here are are just a few of the players throws i have tried to emulate (using their darts):

1. John Lowe: Johns throw is perfect, however it just doesn't on any level for me.
2. Phil Taylor: Just couldn't get any consistency and didn't have confidence in it due to how little of dart i was holding (this was phase 1, 2 and 5)
3. Dennis Priestly: Ugh, the man is  Legend, how he can even hit the board with that grip and throw is beyond me???
4. Eric Bristow: Did have moderate success but god did i suffer from some off angle darts.
5. Raymond Van Barneveld: May as well have been deliberately throwing them off the board (Phase 1)
6. Leighton Rees: No idea how he managed to get near a T20?
7. Ted Hankey: Incredible darts in practice, however 14g darts just didn't work for me in a competitive environment!
8. Simon Whitlock: Just didn't work at any level!

as you can see, quite a variety and none of it worked for me.

What i have learned is that if it feels natural it will feel better and more confident and that involves rhythmic style that is not too dissimilar to MVG (without ever trying to copy). Every time i have tried to slow it down and think it hasn't worked!

This is just how it feels for me and the beauty of darts is that it offers a HUGE array of options and discovery.

anyway, just a quick update i hope everyone has a great day

In particular Lil Al, a guy who despite being 80 is still going online, and still throwing darts

For me this is what its all about. I know i have posted about it before however i hate age being used to denigrate players for being 'past it', 'unable' to play or a reason for a decline in form.

Now i know this will apply to certain sports (boxing, mma, football etc), however in darts this is one of my BIGGEST pet peeves!

People bemoan Phil Taylor for declining due to "ahem" age when the reality is that he is still beating the best and  still putting up insane averages! The mans 56 and yet some players are retired in their 40's. In theory if age is a factor shouldn't every sub 50 player be beating Taylor?????  - utter nonsense!!!

The sport has seen some great performances by players 50-55+

are just a few that spring to mind!

Martin Adams is 60 and has said he wont stop, and why would he the guy is still fantastic (and won the Dutch open aged 59)???

If you love it, and still want to do it why should a date on a piece of paper dictate whether you can or not?, hell the Rolling stones are aged 69-75 and still touring........and whats more people STILL want to see them!

The bottom line is if someone in their 80's can play competitive darts, and plenty of players have competed into their 60's then its never to late!!!!!!!!

Lil Al - You have inspired me!

i have received a number of emails recently asking how i am and why my posts have reduced and how my darts are going.

I'll be honest with you, i haven't picked up a dart  properly in several weeks.

I have been struggling with a back issue that i'll be honest has hindered me since i started playing darts.

The injury originally stems from an accident at work some 7 years ago and re-aggravated about 3 years ago and forced me to quit bodybuilding. I basically have no intervertebral disk at L2 and have damage to the discs above at below it. This can result in severe pain and discomfort in everyday tasks let along leaning for darts.

This is in addition to damage to my shoulder, hips and knees from boxing, wrestling and lifting very heavy weights.

It is not something that is going to get better, and a fusion will see my range of motion completely limited so it is something i have to work around.

At the moment i am looking at alternatives. I have tried DDP yoga and that works very well however i need to work on ways to additionally strength the back, hip and knees areas without affecting my ability to throw a dart, as has the lack of hours in the day to practice due to work.

I had intended 2016 to be a year where i played consistently, and this has probably been my worst year for playing darts since i started (only 3 years ago mind).

I am going to try and get myself darts fit as i would like to defend the Sutherland Cup for the third time as automatically qualify as a past winner and get back and beyond my best standard.

The thing is i'm not the kind of person whose happy to turn up to a competition or league match unprepared and unfit and lose to a player i should and would be beating. For me its no fun just turning up for a 'chuck about'.  I want to, no scrap that i need to win and i wont play unles si know i can give somewhere near my best.

anyway thank you for your emails 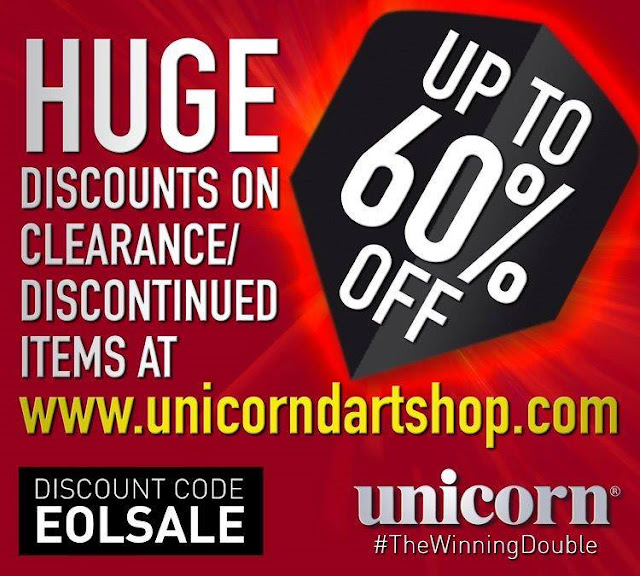