This is my current setup as I try and fix my throw. 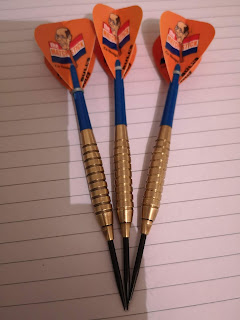 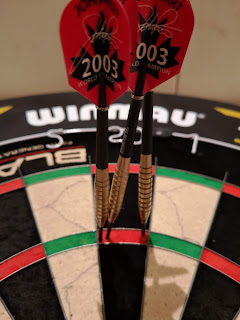 Seriously  I have used every setup with these over the last 3 years and everytime they deliver!
Posted by Luke at 13:34 No comments:

I just wanted to give a shout out to 'The Asset' Paul Nicholson for his run in the 2018 PDC Gibraltar Trophy which lead to the the Semi-Final. His first semi-final appearance in a PDC event since the 2014 PDC World Cup of Darts 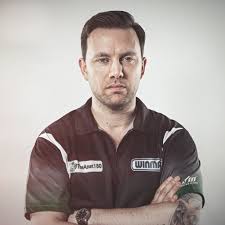 Paul who re-won his tour card this year often gets maligned for his early PDC days when his 'bad guy' persona backfired,  however having met Paul at exhibitions he is a great bloke and when he is 'on' he has a cracking game to him.

Its a shame that Paul wasn't able to capitalize on his early PDC success of reaching the PDC World Championship Quarter final in 2009 and winning the PDC Players Championship Final in 2010.

Still on 39, i hope 'The Asset' can build on this and climb the rankings as he has a tremendous amount to offer the game! 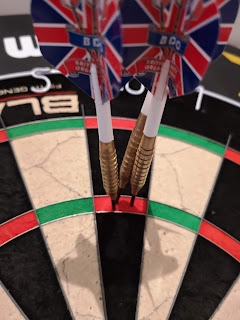 I've been playing  a little practice game called 100 darts at 20.

Points are allocated for each part of the 20:

Give it a go its great for making you push your training!

I had to write to congratulate Glen ‘Duzza’ Durrant on his BDO World trophy win this Sunday the 3rd of June 2018. 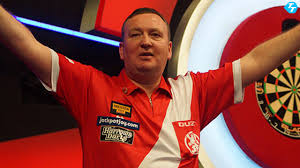 In doing so Duzza has done the amazing clean sweep of all the BDO Majors:

Duzza has now competed in an amazing 7 finals and won all of them at Major level.
In doing so Duzza has now achieved what no BDO player has ever done, won all 5 of the modern tournaments (BDO Legend Martin Adams has yet to add the World Trophy)

What I find even more incredible is that Duzza didn’t qualify for the Worlds until 2014 and since then has won all 4 majors (7 in total) and 23 Open tournaments in 4 years!

I think it’s fair to say that Duzza has now cemented himself a modern day BDO legend , and has show that age is no barrier to success!