My interview with the Legend and former world champion Steve Beaton

The former BDO 1993 World Master's and 1996 World Champion Steve Beaton has taken time out of his very busy schedule to do this interview with me. 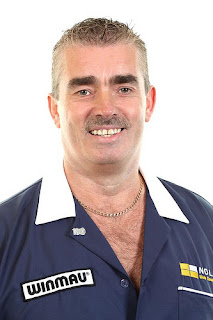 I am proud to present to you below, my interview with the 'Bronze Adonis' Steve Beaton:

Q1: You made your majors debut way back in 1984 in the BDO World Masters (an incredible 33 years ago) memories of that era and making your debut in that event as a teenager amongst some very BIG characters. It must have been a daunting experience?

SB: YES IT WAS A BIT DAUNTING BUT IT WAS A GOOD TO PLAY AGAINST SOME OF THE SPORTS GREATS AND TO THIS DAY I NEVER THOUGHT I WOULD STILL BE PLAYING AT THE TOP LEVEL OF THE SPORT.

Q2: Who were your darting inspirations growing up (if you had any) and were there any players who had elements of the game you tried to add to yours?

SB: ERIC WAS MY SPORTING ICON BUT I DID LOVE THE WAY JOHN LOWE THREW A DART. THERE WAS A LOT OF GOOD PLAYERS AROUND WHEN I WAS STARTING AND MANY OF THEM BECAME CLOSE FRIENDS OF MINE AND IT'S STILL NICE TO BUMP INTO EACH OTHER NOW AND AGAIN AND REMINISCE.

Q3: You are 3rd in the all-time most appearances in the world championship with 26, behind joint leaders John Lowe and Phil Taylor on 28. In this time many players have come and gone and yet you have outlasted most of your 90’s contemporaries. What do you attribute your longevity to and with Lowe retired to exhibitions and Taylor retiring in 2018 will you try and break the record?

SB: I HAVE ALWAYS LOVED THE SPORT AND ALSO I ENJOY THE EXHIBITION SIDE OF THE GAME WHICH I THINK HAS HELPED. I TRY TO KEEP FIT WHICH ALSO HELPS. WOULD LOVE TO KEEP PLAYING IN THE WORLDS AND BEAT PHILS RECORD WHO KNOWS!

Q4: You use a very specific set of darts and setup. What was the first set of darts you owned and what weight were they?

SB: MY FIRST SET WAS JOHN LOWES TUNGSTEN 22GM. I ALWAYS STUCK WITH THE SAME SET FOR YEARS UNTIL ONE NIGHT AT A EXHIBITION SOMEBODY STOLE MY DARTS AND THEN I HAD TO FIND A NEW SET. SINCE I MOVED TO WINMAU I HAVE HAD A FEW DIFFERENT SETS BUT THEY HAVE EVERYTHING ON SITE TO MAKE DARTS SO ITS GREAT WHEN YOU TELL THEM WHAT YOU WANT AND AN HOUR LATER THERE THEY ARE BRAND NEW AND ALSO CAN BE TWEEKED TO YOUR OWN REQUIREMENTS.I STILL USE 22GM BUT NEVER GET TO ATTACHED TO A SET AND CHANGE THEM WEEKLY FOR A NEW SET AS THEY ARE MADE TO SUCH A HIGH TOLERANCE THAT THEY WOULD ONLY VARY BY 0.1 GM WHICH YOU WOULD NEVER NOTICE THE DIFFERENCE.

Q5: You have been known for your fitness routines, however many have felt working out has affected their throwing accuracy. What routine do you follow and how did you avoid it affecting your performance?

SB: I USED TO GO TO THE GYM QUITE OFTEN AND DO WEIGHTS ASWELL AS RUNNING. NOW I TEND TO LEAVE THE WEIGHTS OUT JUST INCASE I PULL A MUSCULE AND I HAVE CHANGED THE RUNNING TO SWIMMING WHICH HELPS WITH ALROUND BODY FITNESS.

Q6: An obvious one, but how often do you practice these days and has age affected your physicality to practice for a long duration or is it purely other interests?

SB: I TRY TO PRACTICE AT LEAST AN HOUR A DAY LESS IF I HAVE ALOT OF EXHIBITIONS. AS I AM GETTING OLDER WEAR AND TEAR IS A FACTOR AND HENCE IT'S NO GOOD THROWING FOR TO LONG BEFORE A MATCH AND THEN UNDER PERFORMING WHEN THE GAME STARTS. 40 YEARS OF DARTS HAS IT'S TOLL!. WHEN I WAS YOUNGER I WOULD PLAY EVERYDAY AND TAKE MY DARTS EVERYWHERE JUST INCASE I GOT A CHANCE OF A GAME SO THE RIGHT PRACTICE IS IMPORTANT.

Q7: Some players obsess over a missed double or performance/loss, and will hit the practice board after a match and others chalk it up to a bad day at the office as you can’t win every match. What side of the wire do you sit on?

SB: I THINK IT CAN BE A BIT OF BOTH. I THINK IF YOUR MISSING DOUBLES THEN MAYBE YOU SHOULD PUT A BIT MORE PRACTICE INTO THAT AREA OF YOUR GAME AND ALSO YOU CAN'T WIN THEM ALL SO YOU HAVE TO MOVE ON EVERY DAY IS DIFFERENT.

Q8: Darts for some reason doesn’t tend to honour its past greats in the manner as other sports and I’m surprised that the PDC hasn’t picked up the ‘League of legends’ television concept, since there is still a very clear demand to see the legends of darts (and I imagine this will only escalate when Taylor and Barney retire). Is this something you’d be interested in if the PDC went this route?

SB: YES SOUNDS GOOD BUT HOPEFULLY I WILL KEEP COMPETING FOR A FEW MORE YEARS YET.

Q9: Outside of your 2 Majors, what is your favourite win/performance? Many people think it’s your incredible performance against a still very much on top Taylor in the 2010 Grandslam when you won 16-14?

SB: THE GRAND SLAM AGAINST PHIL WAS A GREAT NIGHT FOR ME BUT UNFORTUNATELY I LOST THE NEXT ROUND AND THE DREAM CAME TO AN END. I STILL THINK I'VE GOT A BIG WIN IN ME SO I WILL HOPEFULLY HAVE ANOTHER MAJOR TO MY NAME.

Q10: The travel schedule is lauded as gruelling at best and you still find time to do exhibitions. Is it just something you deal with or doesn’t it affect you?

SB: TRAVEL SCHEDULE IS HARD BUT EXHIBITIONS ARE MY BREAD AND BUTTER AND I NEED THESE TO HELP ME FUND ENTRIES/TRAVEL AND ALSO TO PAY THE BILLS ETC.

SB: I HAVE HAD A FEW OVER THE YEARS BUT ALOT HAVE FINISHED AT THE HIGH LEVEL NOW. I TEND TO GET ON WITH MOST OF THE PLAYERS SO WILL TRAVEL WITH ANYBODY IF IT HELPS WITH PLANE JOURNEYS TAXI'S ETC.

Q12: And lastly, what is a typical day in the life of Steve Beaton these days?

SB: GET UP FAIRLY EARLY HAVE MY BREAKFAST AND TRY AND DO AN HOUR OF PRACTICE AND THEN OF FOR A SWIM. ALWAYS PLENTY TO DO AROUND THE HOUSE IF NOT.

I would just like to take the opportunity to thank Steve's wife Nanette for setting this up and to say a BIG thank you to Steve for taking time out of his busy schedule to do this, it has been an honor and a privilege.