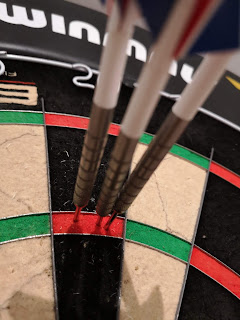 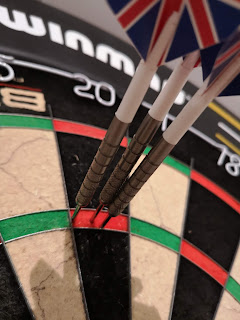 Not bad going, please to hit 2 x 180 with my first goes on the harrows 22g Torpedos.

Anyway abit of fun with a few cans of Fosters in hand.

Give it a go, though your arm wont thank you the next day

Hi guys
Some random musings with a beer in hand whilst my wife smokes my mastercard on her 40th bday girlie holiday purchase (and my darts purchases at around £20 get moaned at)
Now I totally get the rationale behind it. Slimmer = more space in the segment/treble. Hell I've been there with the 14g Hankeys, 10g featherlights, 22g Adams, 25h MVG etc. I lived. For the sub or low 6mm dart.
The reality is that I threw a chunkier number ala 25g Ton Machine far better though it Conflicted with the logic in my head.
Couple that with that so few pros use a chunk dart (can you name 5 current pros?)  and i felt I was cheating myself.
Now go back 30 years and though it was likely due to the tech far more players used chunky darts:
Rees
Lazarenko
Glazier
Whitcome
Early Lowes
And whilst they ave were lower than nowadays the boards were far worse and the segments 14% smaller, so there scoring would obviously be superior now
We all have different sized hands and styles so maybe a 31g chunky would be better than a 22g skinny for some players.
Maybe it's best to forget the aesthetics,and weight and just throw what works best after all how many players have won the WC with sub 20 darts?
Priestley 12g
Deller 18g
Anderson 18g
Hankey 14g
Walton 18g
Bunting 12g
Hell maybe some pros should consider it as well!

Honesty is the best policy: Do the right thing!

I was invited to an open on Friday 31st August which was on the Sunday the 2nd September.

I am and was thoroughly under practiced and so I deliberated for ages and decide to go literally at 19:00 for a 19:30 start.

I arrived not expecting alot as it was the first time the venue had run a darts event however they had done themselves proud.  It was a great setup, multiple boards, ring lights and a finals stage with raised oche and everything.

This setup wouldn't have looked out of place at a Pro event.

I had been fooling around with my setup when i have practiced and after a few throws realised the darts weren't flying great for me but only had kites and not standards.

Anyway i practiced for abit and got my eye in and in the draw i was entered into a Prelim for round 1.

In the first round i drew a lad called Jack.

we were pretty even until he hit a low score and i left 109.

No one had noticed. it looked in given the angle and light.

I had a choice. Cheat and progress or admit fault.

I chose to admit as winning by cheating isn't winning and not my style.

I asked for a re-start and i admit i was 'gone'. Elation at nailing a 109 was replaced by internal anger.

I Missed d16 by the narrowest of margins hit 7, ended up on d1 and missed 9 match darts at D1 to snatch a loss from the jaws of victory.

I shook the lads hand and though i was furious and had lost i knew i had done the right thing.

Looking at the draw and what transpired I could have made the final as Jack reached the Semi's however it would have been a hollow progression. 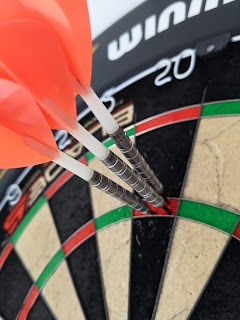