I hadn't planned to play and had forgotten all about this until I got the txt reminder. I'd paid at beginning of the year so thought  "why not"

Anyway received a bye into round 2 thanks to a no show so played  guy called Dave Ainsworth who had struggled to win his  first round matxh.

It was first to 6 until the quarters

This meant I met Mark Sandford in round 3.

I lost to a far better player. Over a long format though I think I may have fared better as I was averaging in the 80s the last 3 legs.

Not to bad for someone who doesn't play anymore

I literally haven't picked a dart up I'm months due to my problems. 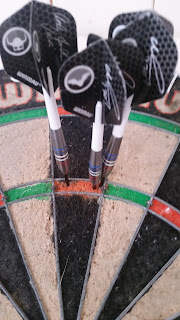