Guys these £10 Argos jobs are really hitting the spot! 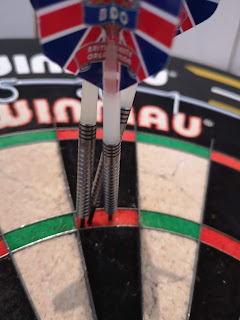 My Interview with BDO Legend The Silverback Tony O'Shea

I am proud to be be able to bring you my interview with BDO Legend and 7x Major finalist, 'The Silverback' Tony O'Shea: 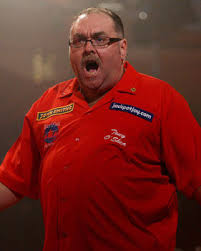 Q1. A nice easy one. How did you get started in darts and how old were you?
TO. I was 18 years old, playing for a football team and to raise funds, we use to play killer for squares on the football card and more often than not I would win the card.
Q2. What were your first set of darts, rumour has it you used a set of original Bristows for years?
TO. My first ever set of darts were brass and Barry Twomlow 20g.  After a while, I played with various tungsten, I decided to use a set that you just got of the shelf and Eric Bristow was the most popular, I played with these for more than 20 years.
Q3. You seemed to burst onto the scene in the mid 90s, with I think the Welsh Open being your first listed one. what were you doing in darts before that?
TO. I started playing county darts around 1980 for Lancashire, playing mostly in the B team and worked for Alan Evans who was a neighbour of mine in Stockport.  In the mid 90's I won various open championship, but did not play on the World ranking tour until the late 90's.
Q4. As a more mature darts player have you found age has affected your play and practice and how does your current practice routine differ now (if any) from what it was?
TO. Age has definitely affected my tournament play, if you get the later stages of an open event, you are looking at 10 hours at the venue, when I was younger this was not a problem, but  definitely starting to feel the pace as I get older.  I have never been one to practice a lot and 2017 after having knee replacement surgery, did not throw a dart for almost 3 months.
Q5. You are one of the most popular darts players out there and a real crowd favourite. Do you still have the same drive to compete and how long do you think we'll be seeing the 'Silverback' entertaining the crowd?
TO. Obviously, I love the game and want to play for as long as I can or for as long as people pay me to play!!!!  I still do have the drive for tournament play, but I really enjoy the exhibition circuit, where there is more interaction with the audience.
Q6. You have featured in 7 major finals, something most players can only hope to dream of. Is there one that particularly sticks in your mind or bothers you (your match with Hankey must rate as one of the best world finals of the 00s in the BDO) ?
TO. Yes, I have featured in 7 major finals, the Ted Hankey 2009 was the best atmosphere I have ever played in, when the match became 6 sets each, the noise the crowd made singing my name, still gives me goosebumps today.
Q7. You have won many Opens and tournaments, most recently the 2017 Turkish Open. What is your favourite tournament win & is there any non televised events that stick out in your mind for your performance?
TO. My favorite tournament win, would have to be the 2009 WDF World Cup Single Championship, the 4 best players from over 40 countries competed for this title and for me this is probably the hardest title to win in the BDO system, this win also helped England to win the World Cup that year.
Q8. You recently went for the PDC tour card. What prompted this decision and do you regret or have considered moving earlier?
TO. My decision to try Q School this year, was prompted by the fact that I missed the last Lakeside, a break in the middle of the season for my  knee operation meant that I dropped for 14 in the rankings to 55 when I resumed playing meaning I missed the Lakeside, it made sense to try Q School and I really enjoyed doing it.  Since 2009, I have received 6 wild card invites for the pro tour, due to the fact that my ambition was to always win the Embassy I have never taken them up, but with hindsite maybe I should have excepted the first one in 2009.
Q9. Memories of your televised 9 darter in 2007 against Adrian Lewis in the International Darts League (this was when  9 darters were still television rarities)?
TO. 9 darters were rare around 2007, but in that years International Darts League myself and Phil Taylor both hit one in that tournament.  This was a really special day for me, as it was my 46th birthday, my grandson was born on that day and to top it off I won against the legendary Adrian Lewis. ( If Carlsberg did birthdays!!)
Q10. Any advice for the aspiring player?
TO. Practice, practice, practice, this would be my advice to any up and coming young players.
Q11. How is your health these days?

TO. With 60 fast approaching, obviously age is a factor in modern darts, the schedule that a player has to go through these days, with tournaments, exhibitions and county darts etc. is very grueling, then when you add knee replacement surgery and diabetes it is not hard to see that the end of my careers may not be too far away 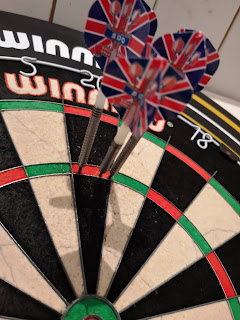