Class from the past: Lowe and Bristow hit consecutive Triple Bullseyes!

check this piece of utter class:


Merry Christmas
Posted by Luke at 00:17 No comments:

Brass darts: Don't write them off!

I wanted to take a minute to reflect on a dart which was once the industry lead but is now merely considered a cheap 'entry level' type, and that is the brass dart!

There is just something about the feel and grip of brass that even with all the new coatings:


still hasn't been able to be replicated.  As John Lowe has said: "there's nothing like the feel of bass darts"

Of course there is a trade-off. Being a much denser material Tungsten has the drop on brass darts in weight to size ratio's with brass darts often being very big in comparison however i would not necessarily let that put you off. Having been blessed with large ish hands i have always struggled with thin darts as a rule and many of my best practices and even performances were with a set of 12g brass darts.

Of course, unless you are throwing traffic cone sized darts size should not necessarily be considered a hinderance. Whilst i do not know of any professionals out there today who use brass, there are plenty who throw darts that would be considered to be 'heavy' or 'chunky' compared to what is available (e.g. if it followed suite then all professionals would be using Ted Hankey style 14g's, as you can fit about 20 of them in the treble 20)

It should also be remembered that players of the past like Leighton Rees (user of 31g darts, large darts) and Jim Pike (large brass darts) were stars in their era and had no problem hitting the target. 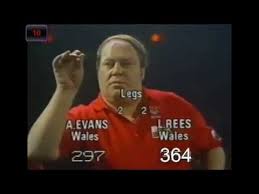 In-fact if we take Rees as an example, he used brass until the advent of tungsten and even then Rees used a set of 31g that were poorly weighted (it was acknowledged by Winmau that when copies were taken of his darts for their replicas that the weight differed from 27-31g for the 3), and very large by today's standard (8.5mm wide and 51mm long  =brass type dimensions) and yet Rees had no trouble hitting the 180's even with the thick wires and staples of the boards then.

It should also be noted that he won the first darts world championship in 1978  and the Butlins Grand masters in 1978, and undoubtedly would have won far more tournaments had there been the proliferation of them as there is today.

That's an average of 91 across the tournament with these thick 31g darts. Now lets fast-forward  37 years to 2015 and the BDO world championship.   Despite all the advancements in darts technology, flights, stems and boards the eventual winner Scott Mitchell averaged 92.61 in the final (only 00.21 higher - although admittedly over a longer format), its nominal isn't it?

So, ultimately what am i getting at??? Its easy really, give brass darts a try. Don't be swayed by the price and size. You can score BIG with 3 brass just as you can with tungsten. You only have 3 darts remember so as long as 3 fit does it matter? Its better to be able to score 100-120 with brass rather than 26 with tungsten!

Is it better, no, its just an option that shouldn't be discredited by virtue of fashionability and cost.

Looking to defend the Sutherland's 3 nations trophy on January 1st 2016!

It looks like i will get the opportunity to defend the Sutherland 3 nations Trophy at the second annual event for 2016 on 1/1/16.

Those of you why may remember i won the inaugural trophy in 2015:

Will keep you posted!
Posted by Luke at 02:24 No comments:

The difference between darts practice at home and the pub/tournaments

I have received a few emails on why players find themselves not being able to replicate their 'home' form in tournament and league matches, especially from new darters.

Well, whilst i would consider myself a novice myself (just 28 months in), i can at least explain the practicalities of it:

the usual question is:

Now i was no different, please read my blog on my first darting experience outside the practice room:


A primary reason (in my opinion) is its all down to environment and nerves. At home you tailor your practice environment to perfection. lighting, noise, location, - hell even temperature and time of day you do it.

Its tuned perfectly (or as close to)  for your preferences.

Now in a pub or tournament environment you have:


its as far from your own comfort zone as possible which is why it impacts so much. This is why at home you can hit the 20's but in those situations your peppering the 5's and 1's!

I found that the best way to simulate such things is to (at home):


This prevents getting comfortable and to acclimatise to distracting conditions.

I would just like to weigh in on my views on the BBC dropping coverage of the BDO darts.

For me this is a travesty. Darts has never been more popular than it is today and the BBC dropping it in inexplicable.  An inexpensive sport to cover (i would hazard a guess that Gary Lineker's 'Match of the day' yearly wage is more than the darts budget combined) , the BBC has only itself to blame if the viewing figures are not what it wants. It has had little promotion over the years, has outdated production values and highlights are half hearted at best.

In short, the BBC has made no effort whatsoever  with its coverage and budget whilst Sky and ITV have invested and are reaping fantastic viewing figures.

What i love about the BDO is its heritage and links to darts grass roots. It is a game that everyone can play and participate in, and indeed qualify for.  There are no binding contracts and it is accessible to every player who competes in their pub on a week night and for a nominal fee.

I like the PDC however however it is now so distanced from the 'local player' scene that it is no longer the same thing, and the competitors by in large are now professional sportsmen and not entering through sheer sport per se. Much the same as football has now progressed beyond the point where the average Sunday league player can ever make it to the BIG time, so has darts gone 2 different routes.

Now i am not ratting on the PDC here, nor am i saying that the BDO players aren't elite however it is about accessibility.

One of the reasons i love the BDO is that i have played in leagues where BDO players play, i can play against BDO players and i can compete in events. Hell, on the BBC i could watch players who i can either relate to, have played, or could play. Its just so much more closer to you than what the PDC offers (unless you want to pay a high price to compete on the challenge tour), and in many ways more aspirational. Whats better than seeing someone you've played, beaten (or even lost to) go far in a TV tourney. It makes you think "i can do that"

Terrestrial TV (here in the UK) is still so much more prevalent than SKY and the BBC could really (for not much money) have got behind it and created household names  of the players (think how much exposure the British Boxers Nigel Benn, Frank Bruno and Chris Eubank got on terrestrial tv). Instead they've dropped it....................well done BBC again thinking for thinking of the good of British sport eh?????

I really hope that someone else picks it up, and whats more does it justice. Darts is an inexpensive sport and whats more potentially very lucrative.

Yes it does need updating (but this doesn't mean booting out Bobby George, Tony Green etc). however it needs to retain its grass roots edge, not try and compete with the PDC (which can throw far more money at it, so you don't even need to go there) yet and be its own thing.

The BDO has a heck of a lineage, worldwide tournaments, and fantastic players. Just a few small tweaks and  improved production values and who'ever takes it on will have a winner.  As for the BBC it should be called:

B: BIG
B: Bullshit
C: Corporation

Since other than the wildlife shows there's nothing redeeming on its broadcasting these days!

Support the BDO people, darts wouldn't exist without it!

I am looking at positives as whilst an average of 60 is no great shakes, and neither is a highest out of 59, i was completely unpracticed, very tired and had consumed alot of alcohol.

In addition i had about 7 or 8 shots for 3 dart 120+ finishes that failed on the last dart, so stats could have been even better.