no repeat of last years final.

Had to play a prelim & drew a quality pair.

i hit a 100 and a fair few 60+ but the chalker messed up which saw the opposition on a lower score.

The standard was high and i was pleased with hitting 3 100+ and being in a place to win especially as doubles arent my forte and i find it impossible to maintain a rhythm in them
Posted by Luke at 13:32 No comments:

its the mixed pairs cup tonight at the 'duke of connaught'.

Random draw so no idea who we'll play. 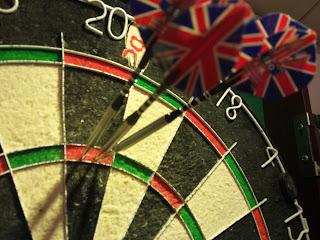 It was a bizaare and long night last night with darts going from 21:00 to 00:00, and no one on both sides playing very well at all. Infact it was the definition of medicocre, as 2 teams both on 4 losses, both with zero points tried to get their first win of the season.

In my match, i won, but it wasnt through good darts. I have been struggling to hit the big scores , and i didnt shoot over 100 last night.

Overall its not a performance to be proud of, but i got the win and thats what counts. Ive played far better and lost, however my pressure caused my opponent problems and i was ruthless on my doubles.

As the GREAT Bobby George says

"Trebles for show, Doubles for dough!"

5th match of season: Home versus Duke of Connaught 'A'

we are hope today against Duke of Connaught 'A'.

This is actually a pretty crucial fixture as both of us had the same run of results so far this season (albeit against different opposition), and sit bottom of the league on 0 Points

We've lost out last few matches against these guys, so we need this to kickstart our season.  The losing team will have it all to do! 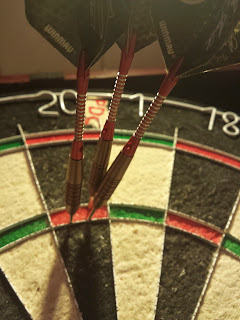 A Thank you to all

Hi Guys and girls I just wanted to say a 'BIG' thank you to everyone who has taken the time this year to check in and view my blog. I seem to have alot of interest from the wonderful USA, Netherlands and Russia, and alot of other wonderful places so i just wanted to say: спасибо dankjewel നന്ദി teşekkür ederim to you all. Please keep on checking in, and i will do my best to let you all know how i am getting on. The goal of course to qualify for a MAJOR BDO event and include all those who cannot be there. Thank you for supporting me Luke
Posted by Luke at 02:54 No comments:

Working out & darts: A warning!

Hi guys i just wanetd to give you an update i hadnt been able to earlier. Its about working out. I started working out again a while ago and all was well, it didnt affect my darts. I then upped the weight and intensity though and i'll be honest..................it destroyed my action. No joke, my form was shot to pieces for a week and it was like i had to re-learn how to throw all over again. Intense tricep and shoulder work is a MASSIVE no, no if you want to progress as a player. It makes sense darts is about muscle memory and any major working out changes the muscle, thus creating a need to re-create it again. Its like starting over each time. I have worked out that players would be much better working on leg, lower back and hip exercises to strengthen these areas as this is where alot of players develop problems.
Posted by Luke at 02:47 No comments:

The force that is Good Intent' rode out 8-1 winners as we barely won a leg.

In truth it was alwasy going to be a hard fixture. They'd already beaten 2 of my favourites to win the league this season, in Hoeford 'B' and the Seagull

Lost first game of the season. I was on 2nd so no real warmup time.

i whitewashed the guy in first leg taking out d16.

I totally f'd up after that. i lost the 2nd leg having had 9 darts at the finish where i botched d20 and ended up missing 9 darts at d10 anf he hit d20 to level.

overall it was a match i should have won 2-0. inexplicably i was rushing my darts and didnt hit over 80 despite alot of 60+

4th game of season: Away to Good Intent

sorry havent posted for abit. Theres been a gap in the season.

We are away to the Good Intent tonight. They are new to the league & sitting 3rd having won 2 of 3. 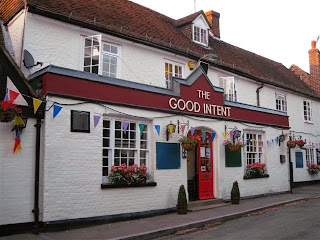